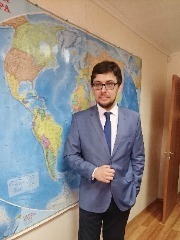 Institute of Philosophy and Social and Political Studies

He is an author of more than 50 scientific publications, an active participant of the international, federal and regional scientific and practical conferences. He developed some educational and methodological complexes and programmes such as "Political Management", "Political PR", "Political Mistakes in Technological Measurement", "Political Advertizing", "Political Communications". He is engaged in trainings on the public statements and electoral engineering techniques.

Roman Pupykin is engaged in research activities within the section of "Social Sciences: Sociology and Political Studies" of DSAYR, is a head of social and political club "Izbiratel" Southern Federal University, a member of the Russian Association of Political Science (RAPS), an organizer and an expert of student's scientific club "Political Science Practice" and "Debate", a chairman of the organizing committee of the annual scientific and practical conference "The Politological Convention of South Russia".