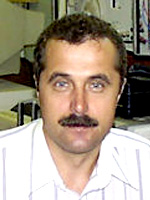 Institute of Radioengineering Systems and Control

In Russia and abroad known for my work in the field of theories of equivalent transformations of linear and nonlinear circuits and synthesis of energy-saving circuits by using the method of equivalent transformation. The synthesized circuit model and developed a polynomial method for the study of the electrophysical and gas sensitive properties of gas sensors in environmental monitoring tasks. A system was developed and studied kinetic processes electrosynthesis ozone in energy objectives adaptive ozone air fuel system of the internal combustion engine. Obtained in the analytical form of the original solution of the problem of nondestructive testing and prediction of developing damage to the insulation of power cable lines of power supply systems. A mathematical model of interaction of system traction drive electric rolling stock through a contact network, in the task of energy-saving control traction drive electric rolling stock. One of the main directions in the field of increase of reliability and uninterrupted operation of electrical power systems is to study their static and dynamic stability.

Research work in the field:

–Development of methods of formation of the new nanocomposite and nano-materials for highly sensitive sensors of chemical and physical quantities;
–The development of constructive-technological principles of a unified Microsystem modules for multi-use multi-touch devices.
Projects:
Development of methods for optimizing the energy consumption of electric trains in dynamic modes on the basis of the integrated management system and energy saving;
Theory and methods of energy saving control of distributed systems of generation, transportation and consumption of electricity.